skip to main | skip to sidebar

A dry, sunny day has interrupted what has been a mostly wet week.  It so happens it was the first day of the decade as well, which meant lots of people enjoying a walk on the Dyke Trail on Boundary Bay.  The short-eared owls were also putting on a show...at least a half-dozen individuals prowled the marshes. 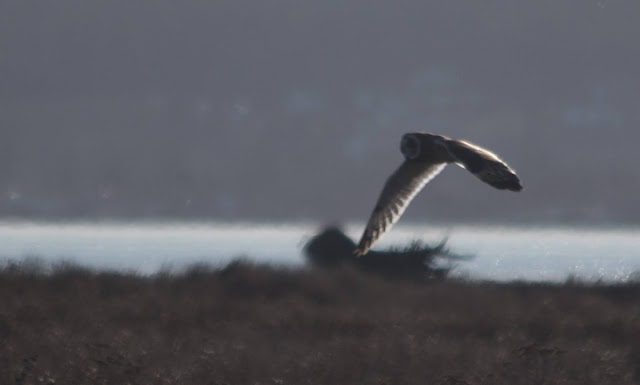 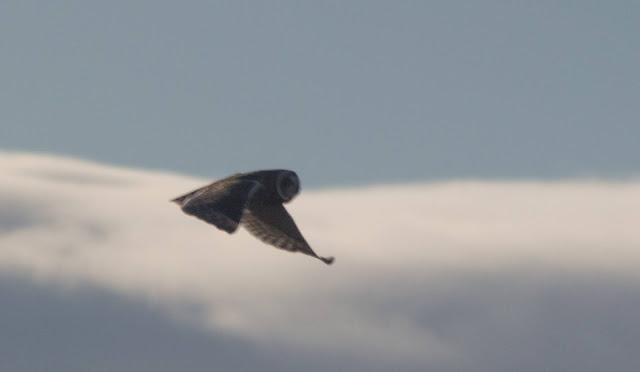 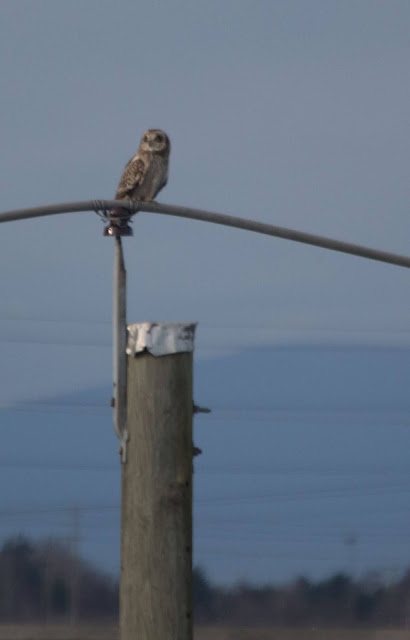 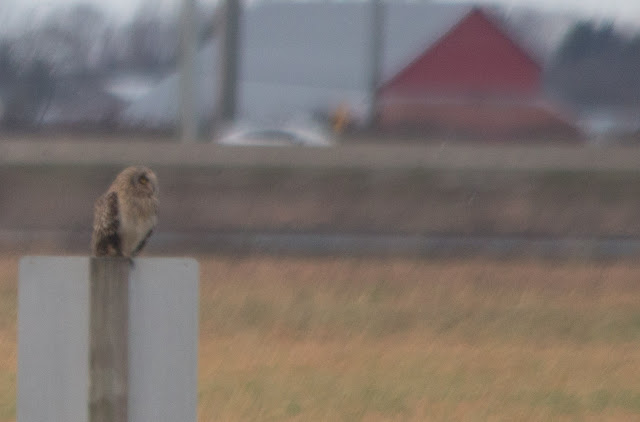 No, your monitor's not fuzzy. For some reason, every photo came out fuzzy, at every aperture level, and it's not a focus issue. Yes, this is a cheap lens, but it's the same cheap lens I've always used, and today was worse than usual. I'll have to run some tests to see what part of the hardware is at fault.
Posted by Tim at 1/01/2020 10:47:00 PM No comments: Links to this post

No fear of wasps

This is not one of the more common species, it seems, as browsing on bugguide yielded no exact matches for dark, short head with pale yellow legs (though the physical variation within species makes matching to still photos difficult).  What we do know is that this one hunts flies, and that 2 year olds (this one, anyway) have no innate fear of wasps.
Posted by Tim at 10/04/2019 12:05:00 AM 2 comments: Links to this post

Spring, a time for eggs hidden in planters

Spring, a time of year symbolized by eggs.  Birds of all sorts busily build nests, lay eggs and incubate as soon as they can to maximize the growth of their family before they migrate.

Canada Geese stake out nesting sites during this time, and their fearless demeanor make them fairly comfortable nesting in manmade structures such as planters or parking lot islands. 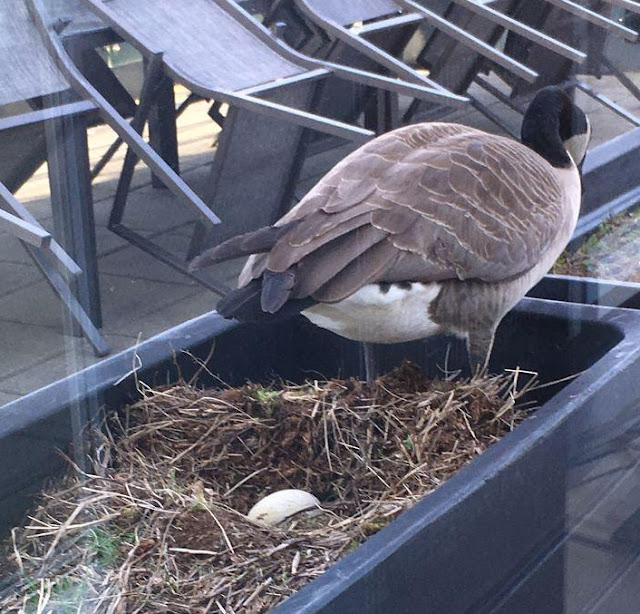 At our office, a goose selected a planter outside one of our windows as a safe place to create a nest and lay eggs.  It is definitely safe, since it's on the fourth floor.  But...well, it's on the the fourth floor.  We consulted Wildlife Rescue, who told us that geese do survive four storey drops, but it would in fact be the glass barrier that would prevent them from getting to ground level.  They recommended we wait until the eggs hatch, (28 days after being laid) at which time they'd send someone to move the family.

So now, we knew that we'd have a closeup view of the goose for close to a month.  The nest was right outside one of our windows, and our IT team set up a webcam to enable viewing by our staff.

The goose laid her first egg March 27, but she'd disappear for a day before coming back and laying another.  While she was away, she'd obscure the eggs with debris, but the next morning, we'd observe another egg laid.  She repeated this until she laid her fifth egg, on April 3, at which time she started incubating. We thought this would be it, but we counted a sixth egg soonafter.  Many birds will lay their eggs one at a time, and only start incubating once the last has been laid to increase chances the chicks will hatch at roughly the same time.

On May 1, exactly 28 days after incubation began, all six eggs hatched. 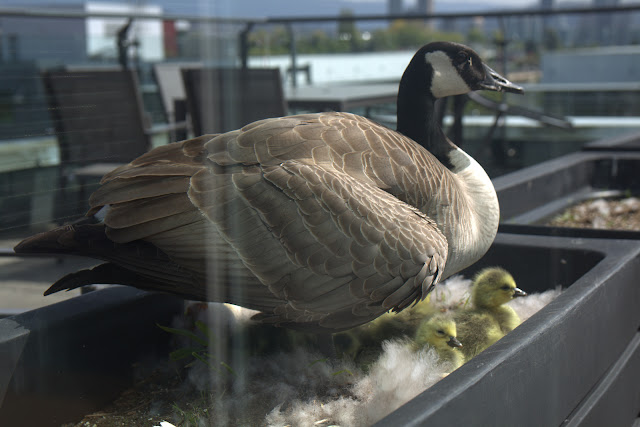 Wildlife Rescue came by the same afternoon, and relocated the family to Deer Lake in Burnaby.

During the last month, we saw the gander only a handful of times, and in the final couple of weeks, we didn't see him at all.  We did see a lone goose sitting in the grass at ground level, but we couldn't tell whether he was the gander for this mother, or for some other family (there were at least a couple other goose families around in our building complex).  Wildlife Rescue doubted he was it, as they should be communicating a lot more frequently.

Wildlife Rescue said that this is a very busy time for geese. Downtown Vancouver is especially busy, since there are few roofs there that provide safe ways for goslings to get to ground level.

Since we had ample footage, I put together a video with all the action. There's a 2 minute and 10 minute version, depending on how much of a goose fan you are.  The 10 minute version has a lot more footage of the rescue operation.
2 min:

Carnivores are interesting, and it's not just because I am one.  They need to use a combination of physical strength, mental acuity, speed, and all round evolutionary ingenuity to overcome another animal, just to survive.  Commonly, they risk their own safety just to eat, and have to overcome some amount of fear that the victim could fight back, causing an injury that could eventually lead to death by not being able to hunt.

Humans are understandably cautious around other carnivores.  They threaten our own safety, or the safety of our pets and livestock. In cities such as Vancouver, large carnivores get pushed out to the boundaries where forest meets subdivision. In Richmond, coyotes might come to mind as one of our largest carnivores, hanging out on the ocean side of the dyke in the tidal marsh.  What if I told you that coyotes weren't the largest?  "Humans, of course," you'd grin.  "No, even bigger."  "In present day?" "Yes, in present day".

Until a whale or dolphin swims into Richmond (which I'm sure has happened, just not in recent memory), I submit to you, the sea lion. 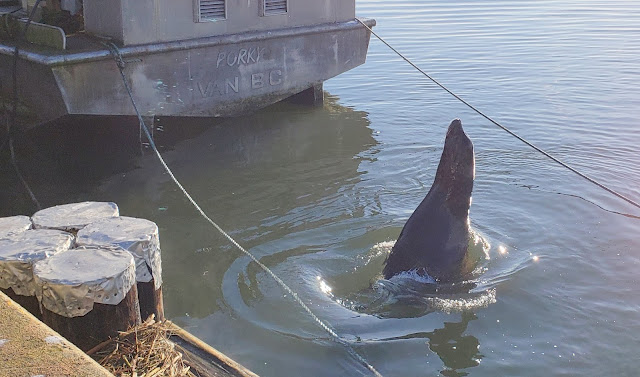 This one in Steveston was a California sea lion, I suspect, as they have longer snouts than the larger stellar sea lions. The males tip the scales at almost 800 pounds (the steller sea lions are gargantuan, at over 2000 pounds), making them much larger than a typical 250 pound black bear on the North Shore. Yet despite this size and sharp teeth, we somehow disassociate them from being predators.  Lacking feet, we think of them as awkward on land.  With most of their sleek body hidden underwater, we don't realize how large these animals actually are, and their capability to inflict harm. Years of seeing them perform tricks alongside humans have acclimatized us into thinking that they want nothing more than to hear applause for their comedic timing. And if I said the word "seal", the cartoon image in your head would surely include a multicoloured beach ball.  We think of them as tame, resulting in unfortunate encounters like this, which happened not far from where I took the above photo.

To be fair, attacks on humans on land are rare.  But given their size and speed, this largest carnivore that frequents our city boundaries demands a healthy respect.
Posted by Tim at 1/13/2019 11:51:00 PM 1 comment: Links to this post